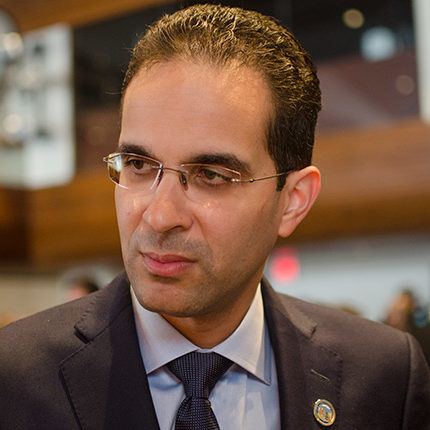 Angel Taveras was the 37th mayor of Providence, Rhode Island from 2011 to 2015. An attorney and former Providence Housing Court Judge, Mayor Taveras was elected as the city’s first Latino mayor with 82 percent of the vote. Under his leadership, Providence was recognized with the All-America City Award from the National Civic League for its plan to boost third grade reading proficiency and the Bloomberg Philanthropies’ Mayors Challenge for its innovative proposal to improve the vocabularies of pre-school age children. In 2013, Taveras presided over some of the first same-sex marriages in Rhode Island.
Mayor Taveras grew up on the South Side of Providence, where he attended Head Start before entering the Providence Public Schools, and went on to graduate with honors from Harvard University. Before pursuing his lifelong dream of becoming a lawyer, Mayor Taveras was awarded an Echoing Green Fellowship to create an after-school program and summer day camp at the Elmwood Community Center. After obtaining his law degree from Georgetown University, Mayor Taveras returned to Providence to practice at the prestigious firm of Brown Rudnick LLP. In 1999, Mayor Taveras participated in a four-way congressional primary and garnered the support of nearly 6,000 voters in the state’s Second Congressional District, while describing his rise from Head Start to Harvard as the fulfillment of the American Dream. The Providence Journal declared that Mayor Taveras’ showing “was the election’s only surprise.”
Mayor Taveras then returned to private practice and later started his own small business, Taveras Law Office, PC, a practice based in Providence where Mayor Taveras established himself as an esteemed litigator and a well respected civic advocate—especially in the field of election law. Throughout his career, Mayor Taveras has demonstrated a profound commitment to public service. In addition to the Echoing Green Public Service Fellowship at the Elmwood Community Center, Mayor Taveras was a founding board member of New Urban Arts, served on the board of the Providence Plan, and on the International Institute’s Board of Advisors. He graduated from Leadership Rhode Island in 1999. He was also selected as a RI Bar Foundation Fellow in 2008, an honor given to lawyers whose professional, public and private careers have demonstrated an outstanding dedication to the welfare of the community.
In 2007, Mayor Taveras was appointed by then-Mayor David N. Cicilline to serve as an Associate Judge on the Providence Housing Court and was twice confirmed by the Providence City Council. During his tenure on the court, Mayor Taveras was instrumental in streamlining the interaction between Inspectors and the Housing Court and to improve the code enforcement tracking system. With the City of Providence at a crossroads, Mayor Taveras understands the critical need to build upon the momentum already underway in Providence. Mayor Taveras draws on his life story, his public service and his professional experience in leading Providence towards a brighter future of increased opportunity and vitality.