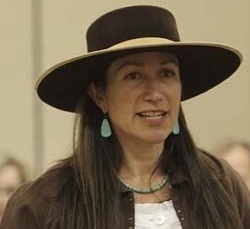 Jael Kampfe received her Echoing Green Fellowship to serve as editor and project manager in developing a Lakota Language textbook, which was the first full-length college curriculum written by a Native speaker. The textbook was published by the University of Utah Press. In 1998 Jael led a group of socially minded native and non-native non-profit leaders in developing Four Times Foundation, a non-profit organization that provided equity capital for reservation based Indians to start businesses. In five years, Four Times Foundation became one of the top ten best privately funded non-profits operating in Indian Country and had a track record of business success that surpassed the national average, despite working in some of the poorest counties in the United States. Jael was also board President of Adelante Foundation, a micro loan fund supporting the poorest of the poor in the La Ceiba region of Honduras. Kampfe then went on to work her family’s 100-year old ranching business Lazy EL Ranch as the first female manager. Jael also does executive coaching, strategic planning, and organizational and program development for non-profits. She and her husband Gerald Sherman are currently guiding an effort to replicate the Four Times model of rural economic development in the state of South Dakota in partnership with South Dakota Rural Enterprise, Inc. Kampfe is currently president at U – Diamond Ranches, a cowboy recreational company and is a writer at Malcolm’s Blind Horse a publication geared to attract impact investors to secure land outside of Glacier National Park.