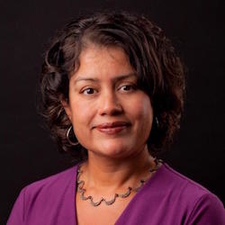 Josefina Alvarado Mena was awarded an Echoing Green Fellowship in 1996 after finishing her J.D. at the University of California, Berkeley School of Law. Josefina used her Echoing Green Fellowship to create the Educational Empowerment Program to provide free legal education and services to low income students in Oakland, California. In 1999, Josefina was recruited by an incoming Superintendent of Oakland Unified School District to head the Department of Student, Family, and Community Services. She was the youngest member of the Executive Cabinet in the history of the organization. During her tenure she helped expand after-school programs, violence prevention programs, parent engagement and mental health programs throughout the school district. As director of the department, she also led the effort to develop the Safe Passage Middle School Strategy that has resulted in a 72% decrease in suspensions for violence at target high need middle schools in Oakland.
Josefina was then recruited to lead Safe Passages, a city-wide initiative designed to reduce violence among the children and youth of Oakland. Josefina was one of only 5 employees when she arrived at Safe Passages. Currently the organization has a staff of 125. As the Chief Executive Officer for Safe Passages, Josefina has grown the organization from a foundation funded initiative to a leading independent 501(c)(3) Multi-service Nonprofit Organization that implements a continuum of programs that serve children and youth, from birth through college and career. A native of Oakland, Josefina grew up in one of the neighborhoods served by Safe Passages.
She received her B.A. in Ethnic Studies from UC Berkeley in 1993, and a Juris Doctorate from the University of California, Berkeley School of Law in May 1996. She is also a recipient of the following honors and awards: Echoing Green Global Fellowship 1996-1998, Education Advocacy Award 2003, Hispanic Chamber of Commerce of Alameda County; Outstanding Education Advocate 1999, People United for a Better Oakland (PUEBLO); Advocacy Award, California Latino Civil Rights Network 1998, and James Irvine Foundation California Leadership Award 2009.