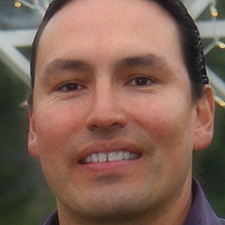 Of the 6,000 tribal members in the Confederated Salish and Kootenai Tribal Nation, fewer than eighty are fluent Salish speakers and almost all are over the age of fifty. As a result, the language is at risk of disappearing altogether, a potentially devastating cultural loss and one faced by other tribal nations. The Salish Language Perpetuation Project promotes revival of the language by forming a Salish language immersion school for youth, publishing a master document of statistical and historical data, building a coalition of community partners and archiving elders’ stories. The organization also tackles issues of alienation and apathy, improves community pride, and fosters cross-generational relationships, ultimately strengthening the identity and self-esteem of the Salish people.

Joshua W. Brown graduated from Salish Kootenai College in 1997, with two Associates of Arts Degrees, one in Bilingual Education and the other in Native American Studies. He then completed an intensive yearlong program in Salish Cultural Leadership at Salish Kootenai College. Mr. Brown went on to earn a Bachelors of Arts in Native American Studies and a minor in Linguistics from the University of Montana. He is also certified to teach English as a second language. As an undergraduate Mr. Brown was a McNair Scholar. His work for this project included conducting historical research at the Smithsonian Institution on U.S. language policies and the impact on Native languages with a particular focus on the Salish language. As a part of the project he also gathered oral histories about Native languages and the struggles they have faced for survival because of national and educational policies.