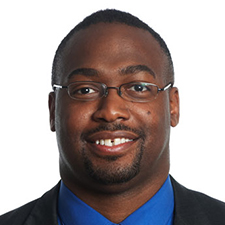 Qeyno makes career discovery into a game that connects modern workplaces to today’s classrooms utilizing a “micro-mentorship” model that incentivizes high school students to pursue their dreams by completing missions and earning badges that lead to prizes, internships, and college scholarships. Qeyno seeks to close the STEM diversity gap by unlocking a future where one professional can micro-mentor thousands of students with a touch of a screen – taking mentorship and workforce development to the next level.

Kalimah Priforce runs Qeyno Labs, which works with local schools and partners to make “career day” an everyday experience for the millions of students that cannot afford private college and career guidance.
At eight years old, Kalimah held a successful hunger strike against his Bedford-Stuyvesant Brooklyn group home to add more books to its library. As a trouble-making high schooler in Harlem, NY, he was mentored by Dr. Lorraine Monroe, a world-class educator, who sowed the seeds to him becoming a social innovator. By the age of 17, Kalimah started his first computer company that primarily served low income neighborhoods. In October of 2000, his teenage brother was shot and killed behind their childhood elementary school, inspiring Kalimah to form a lifelong commitment towards transforming education for under-served kids.
In 2010, Kalimah relocated from Brooklyn, NY to Oakland, CA to launch Qeyno. He is committed to empowering the minority-led startup community throughout the country and is also educator-in-residence for the Oakland-based “Hidden Genius Project”, a program that trains black male youth in entrepreneurial thinking, software development, and user experience design.