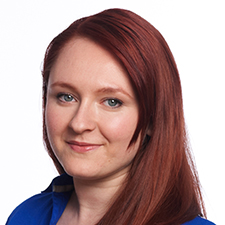 Raise poor multilingual women in the U.S. out of poverty by providing job training programs feeding directly into careers in medical interpreting, as well as coordinating services to support job readiness, career advancement, and family care.

Found in Translation trains low-income women to be professional medical interpreters, giving them an opportunity to overcome poverty by capitalizing on their language skills and unleashing bilingual talent into the workforce to fight disparities in health care. Found in Translation has attracted numerous awards, was ranked in the world’s top 25 social enterprises for women and girls by Women Deliver, and featured in the Boston Herald, Huffington Post, and on JAM’N 94.5.

Maria was born in Russia and lived in Israel before immigrating to the United States. She studied Social Work at Regis College. Before launching Found in Translation, Maria led a pilot program for homeless, unaccompanied youth at the nonprofit Rediscovery. She has also worked with survivors of domestic violence, was a mentor to girls at Big Sister of Greater Boston, a support group facilitator at Parents Helping Parents, a phone counselor on the state-wide Parental Stress Line, and translated for the grassroots media project Alive in Mexico. Maria is the recipient of the 2009 Veronica Award from the Superstars Foundation, the 2010 Pearson Prize National Fellowship, the 2011 Women of Peace Award, and the 2011 Kip Tiernan Social Justice Fellowship.