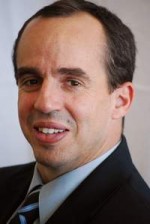 Think Detroit’s mission is to build character in young people through sports and technology. Think Detroit is committed to helping children develop the character necessary for a positive future. Through youth athletic leagues and computer training and access, Think Detroit successfully connects and strengthens children and parents in underserved neighborhoods.

Michael F. Tenbusch is the Vice President for Educational Preparedness at the United Way for Southeastern Michigan. A native Detroiter, he has devoted his career to making the city a better place to be a child and raise a family. Mike served on the Board of Education for Detroit Public Schools for two years, and then served for two years as the Chief Operations Officer at University Preparatory Academy, a K-12 charter school district in Detroit that graduates 90% of its students. He is the co-founder and former CEO of Think Detroit, a non-profit organization dedicated to building character in children through sports and leadership development. Under his leadership, Think Detroit was awarded Crain’s Detroit Business’s “Best Managed Non-Profit” award and was hailed by Laura Bush as a model organization for her national initiative to help America’s youth.