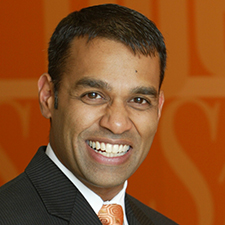 Use a standards-based, college-preparatory model that provides children with the academic, organizational, and professional life skills and supports that enable each child to attend and succeed in college.

The SEED Foundation, Inc. is an organization devoted to bringing outstanding educational opportunities to under served inner city communities. The Foundation’s first project is the SEED School of Washington, D.C., the nation’s only public access college prep boarding school for inner city children. Now in its tenth year of operation, the SEED School has already seen impressive academic and social gains in its students, and the School’s first four graduating classes have earned 97% rates of admission to colleges.

Raj grew up in Milwaukee, Wisconsin. His parents, who had immigrated from India, were devoted to Raj receiving a quality education, and instilled in him their belief that a good education was the way up and out of poverty. Raj attended Princeton University, from which he received a B.S. in Molecular Biology, as well as certificate of studies from the Woodrow Wilson School of Public Policy. Raj’s first job after college was as a management consultant with Mercer Management Consulting. However, Raj’s training as a scientist continued to shape his world view. After a conversation with friends about the challenges of educating urban, at-risk students, Raj developed a scientific hypothesis: that underserved children, when provided with a 24-hour, supportive, academically-rigorous environment, could achieve scholastic success. Soon after, Raj met a management consultant from a competing company, Eric Adler, who also had visions of a college preparatory boarding school for urban youth. Together, they founded The SEED Foundation and opened the first-ever SEED School in Washington, D.C. in 1998. In addition to his role as co-founder and managing director of The SEED Foundation, Raj serves on the executive committee of the Aspire capital campaign for Princeton University and is the former national chair for Annual Giving for his alma mater. He is also a former trustee and executive committee member for Princeton. Raj is a board director for a public company, Colfax Corporation (NYSE: CFX) and serves on the national advisory committee for the College Board Advocacy & Policy Center. He served on the board of The Empower Program, which worked with youth to end the culture of violence. Rajiv an Ashoka fellow. For his work at The SEED Foundation Raj has been named a Washingtonian of the Year by Washingtonian magazine and has received the Manhattan Institute’s Social Entrepreneurship Award, and an Oprah Winfrey “Use Your Life” Award. Recently, Rajiv was named the 2009 winner of Princeton University’s Woodrow Wilson Award, the highest honor that Princeton bestows on an undergraduate alumnus. Rajiv is married and has one daughter and two cats.