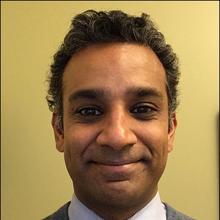 Sarthak Das is Harvard Global Health’s Senior Advisor, Research Translation & Global Health Policy; he is also a Research Scientist, Harvard T.H. Chan Dean’s Office. Prior to joining HGHI, he served as Chief of Policy & Public Sector Partnerships at Partners in Health, where he led efforts to translate advances in service delivery into sustainable public sector programs with partner Ministries of Health and key bi and multilateral entities such as Global Fund, USAID, and at the UN. He was also engaged in the Ebola response of 2014-15 and the subsequent efforts to rebuild health systems in West Africa. Sarthak brings over twenty years of experience as both public health scientist and development practitioner. His work is focused amongst the urban and rural poor and includes expertise in program design, delivery, operational research, health policy, and forging strategic partnerships to advance health equity. He has worked with communities and government leaders in Cambodia, Haiti, India, Indonesia, Liberia, Laos, Malawi, Papua New Guinea, and Sierra Leone. His initial study of global health equity and human rights began at Harvard in 1992 under the mentorship of Drs. Jim Kim and Paul Farmer, both thesis advisors.

He spent eight years living and working in the Highlands of Papua New Guinea leading a collaborative effort to decentralize HIV treatment while strengthening health systems amongst some of the world’s most remote communities. From 2006-2014 he worked as both Country Director and then Regional Director for Southeast Asia-Pacific for the Clinton Health Access Initiative (CHAI) providing strategic guidance to programs in Indonesia, Vietnam, Cambodia, Papua New Guinea, and Ukraine; he also led the establishment of new programs in Myanmar and Laos. He graduated from Harvard College with a joint A.B. in Social Anthropology and Sanskrit/Indian Studies, holds a Master of Public Health from Yale University and Doctorate in Public Health from the University of North Carolina, Chapel Hill.