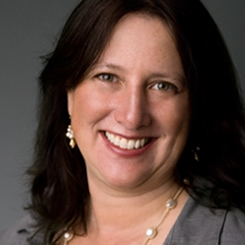 Change the face and practice of leadership in communities across the country by demonstrating that everyone can lead, and that lasting social change results when citizens of all backgrounds step up, take responsibility, and work together.

Public Allies is a national leadership training program that identifies talented young adults from diverse backgrounds and prepares them for careers committed to community and social change.

Prior to launching Public Allies in 1992, Vanessa Kirsch founded the Women’s Information Network, a national organization that trains young women to be effective in politics. She ran Public Allies until 1996, when she and her husband traveled the world interviewing over 350 other social entrepreneurs, citizen leaders, philanthropists, and political officials to identify problems within the social change field. She leveraged this research to launch New Profit, Inc. in 1998. Vanessa has received numerous public service awards and recognition for her work. In 2005, Ernst & Young named her “Entrepreneur of the Year” in the category of Social Entrepreneurship. She has also been recognized by both Newsweek and U.S. News & World Report as a leader of her generation; by Forbes as one of fifteen innovators who will reinvent the future; and by Harper’s Bazaar as one of thirty young women to be leaders in the 21st century.