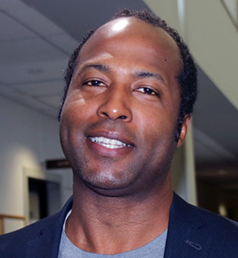 Jason R. Ambroise is an Assistant Professor of U.S. History at William Paterson University of New Jersey, USA. His fields of expertise include U.S. History, the History of Science, and Black Studies. After graduating from Stanford in 1988, Ambroise co-founded the research institute No Humans Involved to bring attention to the treatment of African Americans and Latino Americans by the police in San Diego. Jason R. Ambroise later received his PhD in History from the University of California at Berkeley. He is co-editor of the essay collection Black Knowledges/Black Struggles: Essays in Critical Epistemology (Liverpool University Press, 2015), which explores the interwoven nature of social and intellectual movements for human emancipation.  His current book project is under the working title Order and Condemnation: Criminology and the Formation of Late Modern United States.  He teaches courses on topics in U.S. history; history of science; Black intellectual and social history; the history of “race” (and its intersectionality with class, gender, and sexuality); the history of criminology and criminal justice; modern global history; and “Big” (human) history.